The Cache la Poudre River National Heritage Area was individually authorized by Congress on March 30th, 2009, for a period of 15 years, ending in 2024. It will need to be reauthorized before that time. With the current bipartisan landscape, there is an urgency to pass this legislation now.

The Colorado National Heritage Areas do not own nor manage land within their respective Heritage Areas. Rather, we strive to promote a variety of historical and cultural opportunities, engage visitors and residents in the landscape, and inspire learning, preservation, recreation, and stewardship though various programming efforts.

CALA’s community grants program promotes partnerships throughout our region, and are awarded for preservation, interpretation, and development activities that celebrate the Heritage Area. In the past decade we have invested over half a million dollars in 55 different community grants and leveraged nearly $14 million dollars of public-private funding. An economic impact study completed by Tripp Umbach in 2017 found that the Cache la Poudre National Heritage Area generates an annual economic impact of $81.6 million, while supporting over 1,000 jobs and generating $6.9 million in tax revenue. Without continued reauthorization, we would see significant loss in our region.

Sign-On your Business to a prepared letter 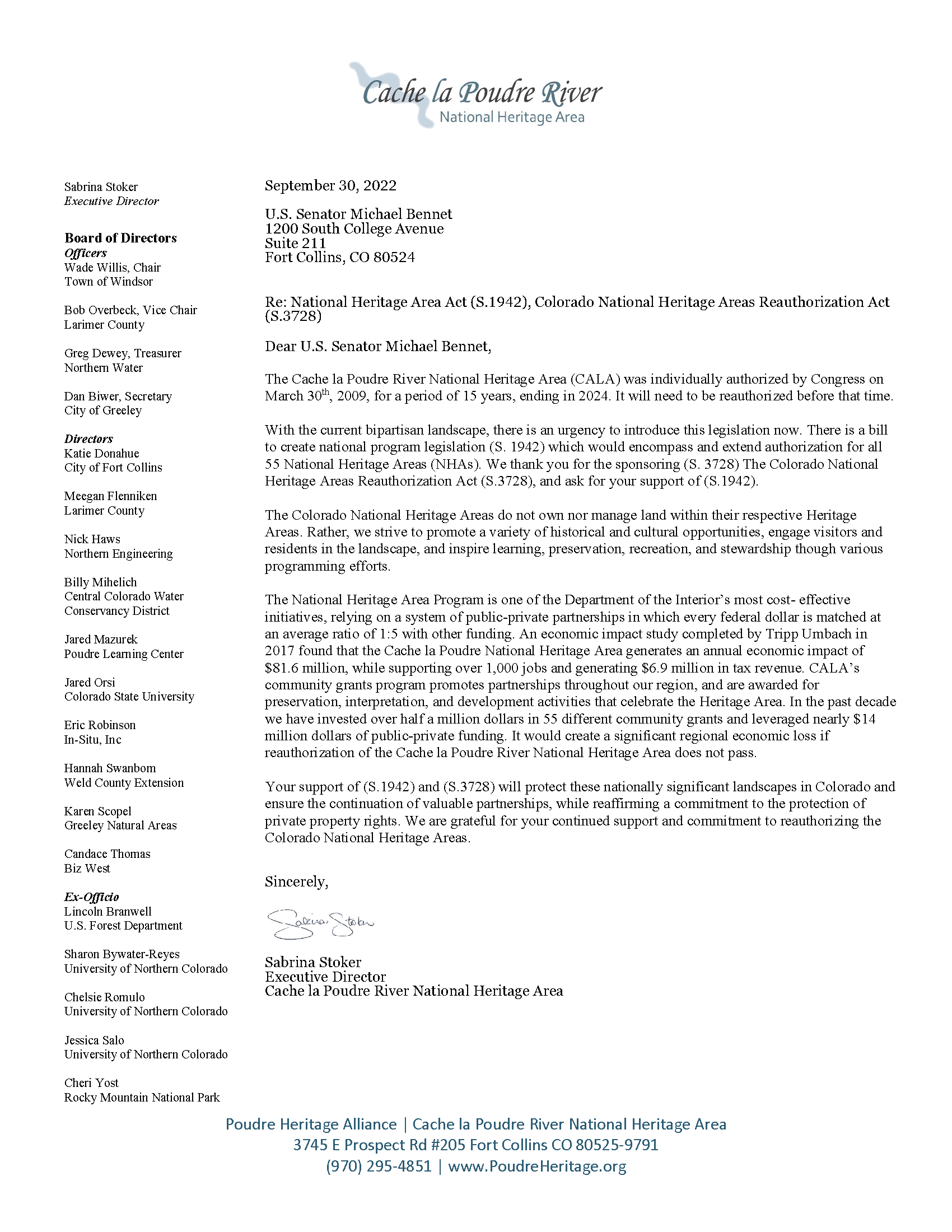 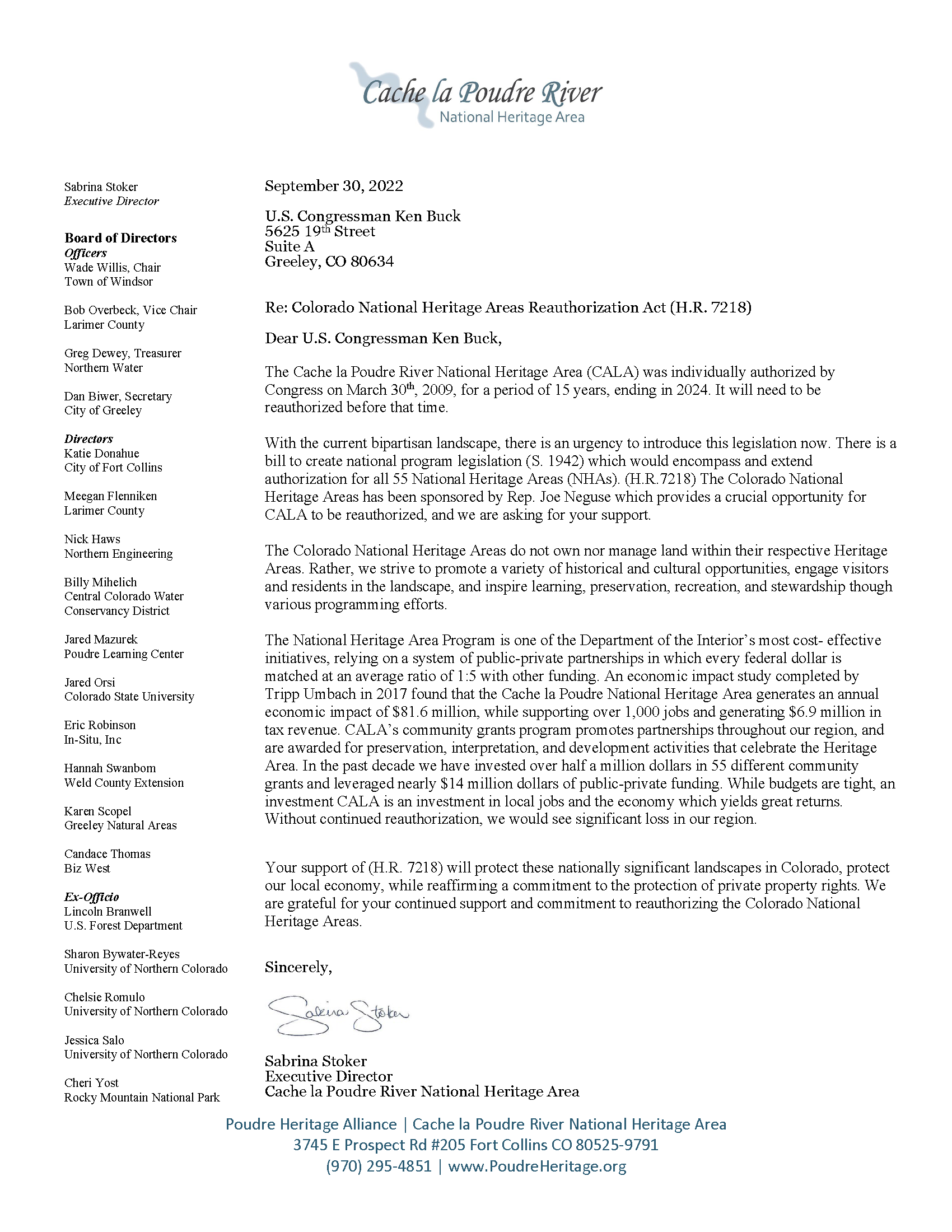 Click on this link and select “Contact Your Member” as shown in the photo below. Enter your zip code in the search box and a list of members will populate. Follow the links to email your member. Be sure to include the bill number listed above in your communication. 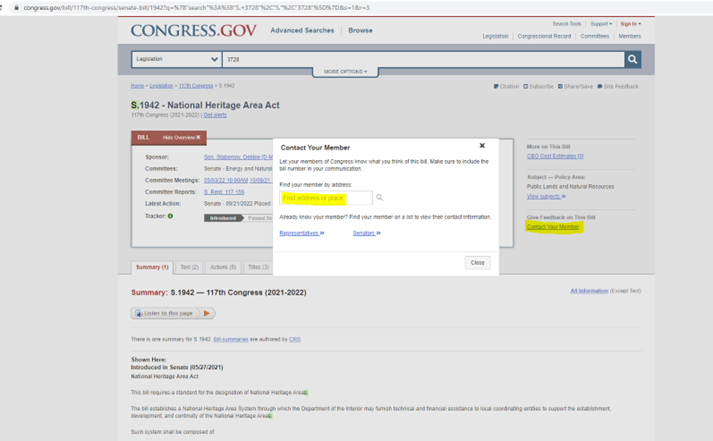 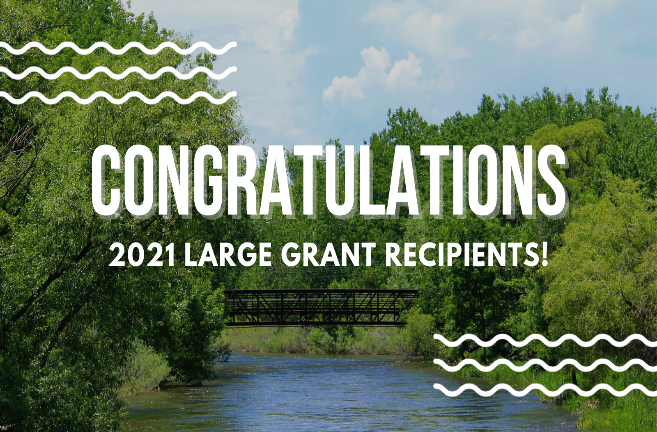 Don’t just read about history. Experience it! Whether you have an hour, an afternoon or an entire day, adventure awaits. We’ve curated four distinct tours that allow pass holders to explore history, connect with nature and enjoy all the Northern Colorado community has to offer. In partnership with local businesses, this pass provides over $100 in discounts and deals to save on admission fees, beverages and more and drives locals and tourists alike to enjoy all Northern Colorado has to offer. 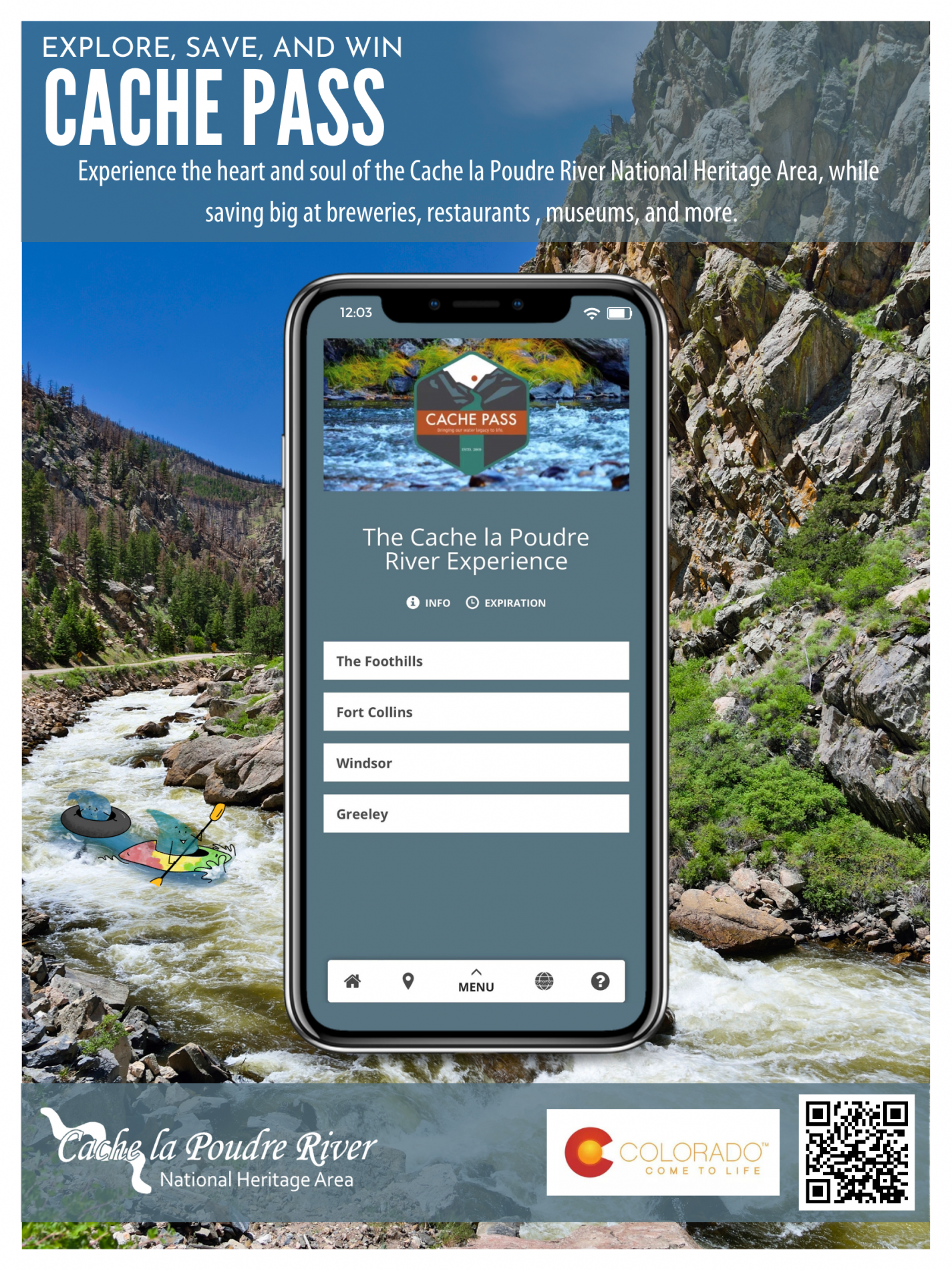 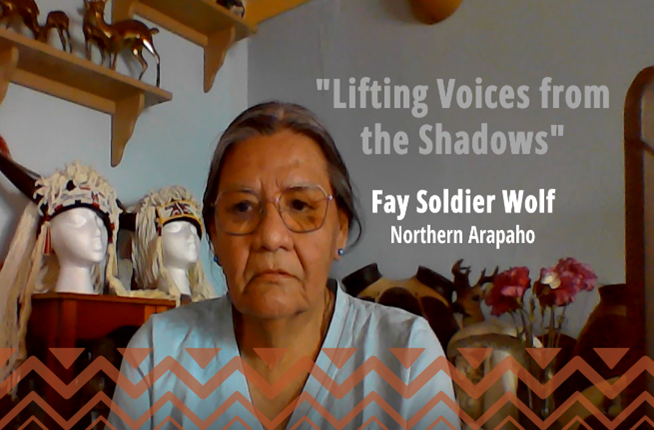 Lifting Voices from the Shadows was funded through the National Parks Foundation focusing on raising awareness of the 19th Amendment’s centennial year. The documentary project highlighted how Indigenous women did not gain the right to vote in 1920. Many gained the right to vote, along with full U.S. citizenship in 1924 (Snyder Act); although, some states continued to deny Indigenous Americans their enfranchisement until 1962.

Learning in Our Watershed™ (LIOW) was designed in 2010 with a simple mission: to help youth understand and value the Cache la Poudre River and their water heritage while inspiring a next generation of river stewards. LIOW provides field trip funding to take learning from the classroom into the watershed to develop a sense of connection to nature and the heritage area 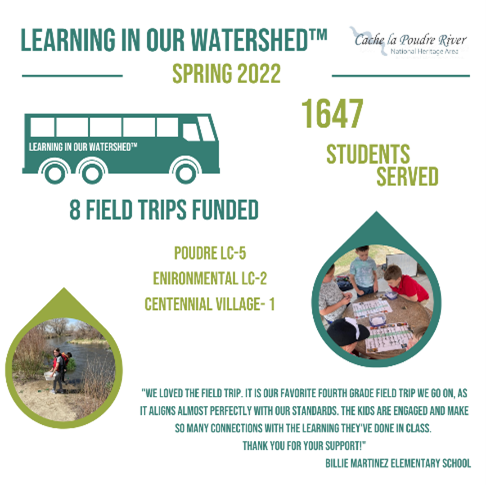 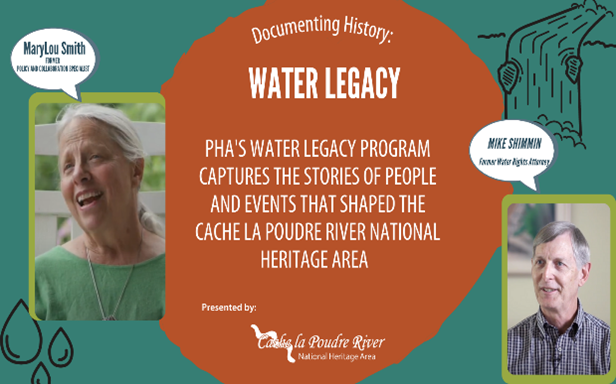 In partnership with the Colorado Water Conservation Board and the CSU Water Resource Archives, the documenting history water legacy program captured the stories of water leaders across Colorado.

In response to the COVID-19 pandemic, the National Heritage Area expanded the Learning In Our Watersheed program to offer outdoor, self-guided learning experiences that build on the routes of our community wellness program. Created by two local educators, SOLO field trips can be integrated into a teacher’s curriculum and easy for parents to use as a family adventure. 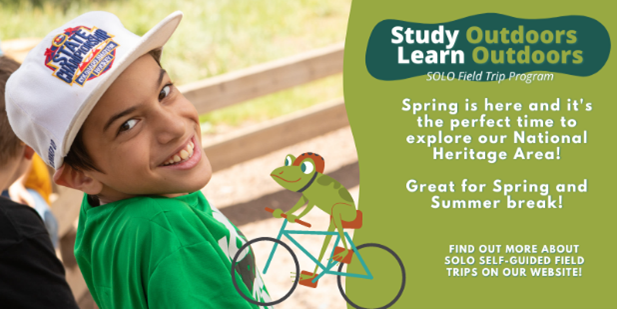 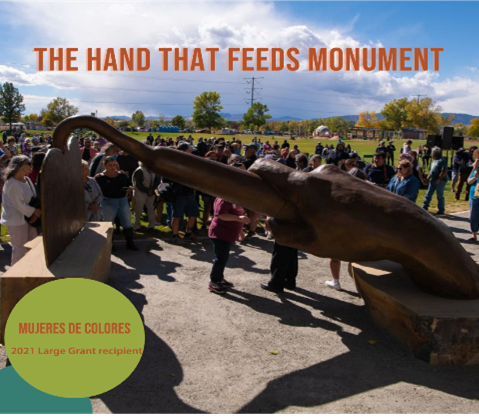 A bronze sculpture honoring the rich history and significant contributions made to the sugar beet industry by Mexican and Hispanic fieldworkers and their families was erected in Fort Collins Sugar Beet Park in the Tres Colonias neighborhood.